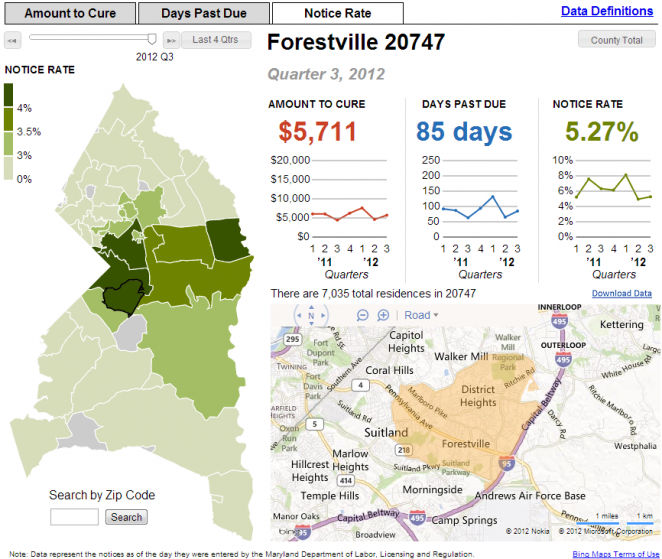 Prince George’s County, Maryland, has been hard-hit by the housing crisis. Through the first three quarters of 2012, one of every ten homes in Prince George’s County received a Notice of Intent to Foreclose (NOI) which indicates the borrower is in default and must be filed before a servicer can start foreclosure proceedings. In 2011 nearly one in six began the process toward foreclosure. In the last three months in Prince George’s alone, over 30,818 families lost or faced the loss of their homes.

How can a community best tackle so pervasive and fundamental an economic and housing crisis? NeighborhoodInfo DC has amassed a toolkit of expert analysis and easy-to-use table, and interactive maps designed specifically for community organizations, neighborhood leadership and residents, and government that can be found on our website and that we provide directly to stakeholders.

Additionally, our interactive maps highlight the foreclosure hotspots in Prince George’s County and show how foreclosure activity has changed over time. The latest brief analyzing Prince George’s foreclosures shows that different areas of the county experienced the crisis in different ways and to different degrees, concluding that a one-size-fits-all approach is likely not the most effective strategy to employ.

One of the ways in which these data have been implemented is through a partnership with the Coalition for Home Ownership Preservation in Prince George’s County. By providing foreclosure data by ZIP code, housing counselors are able to specifically target the most devastated regions of the county. Moreover, maps breaking down NOIs issued by the largest servicer’s in the county have been used by Maryland’s Department of Labor, Licensing and Regulation to compare and contrast the NOI procedures across servicers.

This story was written by staff at the Urban Institute, drawn from documents and interviews with NeighborhoodInfo DC and the Coalition for Home Ownership Preservation in Prince George's County. Urban - Greater DC is the Washington partner in the National Neighborhood Indicators Partnership, a learning network in 30 cities coordinated by the Urban Institute. All partners ensure communities have access to data and the skills to use information to advance equity and well-being across neighborhoods.

NOAH Risk Analysis: What, Where, Who, and When
Institute for Housing Studies
Chicago
Other Activities On This Topic:
KC Regional Health Research Data Consortium


In the fall of 2013, in collaboration with Children’s Mercy Hospital (CMH) of Kansas City, CEI was awarded grant funding from the U.S. Department of Housing and Urban...
Video: Policy Breakfast on Local control in land use decisions: Implications for affordable housing
Furman Center for Real Estate and Urban Policy
New York
Wednesday, March 6, 2019


On March 6th, the NYU Furman Center hosted over 200 participants for the policy breakfast “...
[read more]


Close to 1 million apartments in New York City are subject to the state’s rent stabilization laws, which regulate how rents can rise. In June, 2019, those laws are set...
[read more]

What happens when quality data are put in the hands of changemakers? As Amy Carroll-Scott shared, “Data...