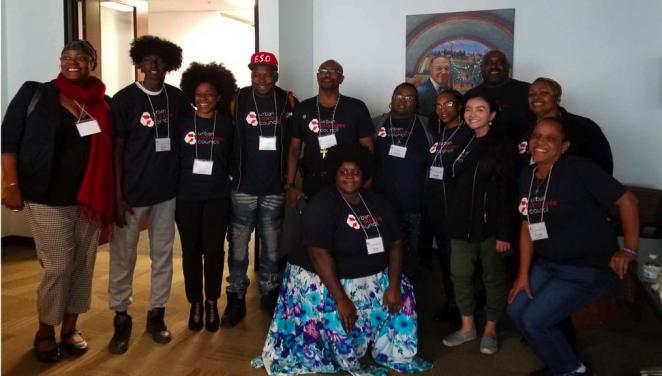 Thanks to community-driven research conducted by the Urban Strategies Council (The Council), the new director of the City of Oakland’s Department of Violence Prevention is planning the department’s strategies with a better understanding of residents’ lived experiences and challenges. The department is now building on the trust gained through the research process as it decides on next steps.

The resident-led research process began in 2018, when the City of Oakland contracted with The Council to guide the department’s approach to reducing gun violence, domestic violence, and commercial sexual exploitation of children. The Council wanted to put the lived experiences of community members most affected by violence at the forefront. The Council’s research team spent the following year engaging Oakland residents to explore these areas in two ways. First, they trained 16 residents to serve as research fellows to lead the qualitative data collection, making sure to recruit young people and Black residents (two groups most affected by violence). Seventeen community-based organizations and many stakeholders worked with The Council’s team and fellows to design and conduct more than 500 interviews, surveys, and focus groups, wherein residents shared recommendations, such as developing a sexual violence rescue app, reevaluating gun violence prevention programs, and supporting the integration of trauma-informed principles in systems and practices.

In addition to collecting qualitative data, The Council also analyzed local administrative data on reported crime, gang activity, and domestic violence. Their analysis showed the disparate impacts of homicides and domestic violence on Black people, reflecting the history of interconnected policies, practices, institutions, culture, and ideologies that disinvested in people of color.

Using both the qualitative and quantitative data-driven findings, The Council submitted a final report to the Oakland City Council in September 2019. Guillermo Cespedes, the Chief of Violence Prevention, spoke to the importance of community input, noting that people are often suspicious about data gathering from researchers, but involving community members both as researchers and respondents legitimized the findings and ensured research reflected residents’ experiences.

Community engagement with the Department of Violence Prevention continues. In fact, Chief Guillermo Cespedes said, “The work in Oakland has probably been the most intense community orientation I’ve had in any job.” The Council’s bottom-up, community-based approach to their research acted in service of the department’s goal: stopping the cycle of violence with the help of those most affected, including perpetrators and victims. Moving forward, the city and The Council plan to continue working together on further participatory research that will focus more on quantitative data to measure the risk of exposure to violence.

For questions about this project or for inquiries about future partnerships, please contact Rania Ahmed, Lead Research Associate, at raniaa@urbanstrategies.org.

In April 2020, the National Neighborhood Indicators Partnership (NNIP) conferred the G. Thomas Kingsley Impact Award to the Urban Strategies Council, which recognizes an NNIP partner organization that has demonstrated impact using data to improve local policy and practice to advance equity and well-being across neighborhoods. NNIP is a learning network, coordinated by the Urban Institute, that connects independent partner organizations in more than 30 cities. The Urban Strategies Council is the partner organization for the City of Oakland and provided the above photograph.


The Robert Wood Johnson Foundation, in partnership with the Urban Institute, has selected 38 organizations from around the country for the...

More communities are considering new public safety strategies outside of only policing and they need to understand their city’s current spending on...

More communities are considering new public safety strategies outside of only policing and they need to understand their city’s current spending on...

The lack of support from the criminal legal system and the stigma associated with having a criminal record create challenging barriers for people returning from...