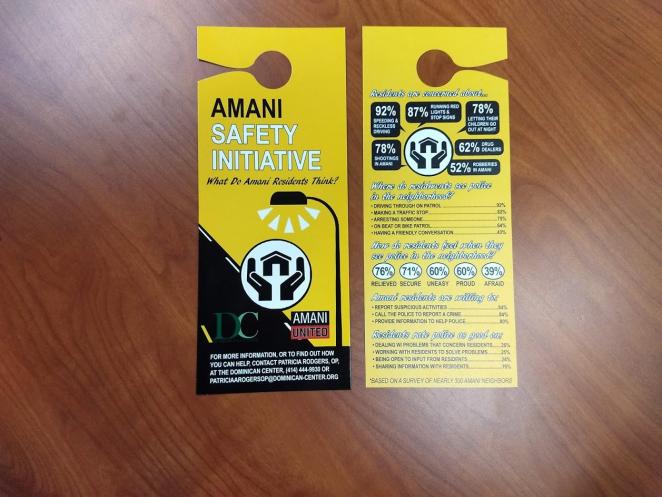 People in Milwaukee’s Amani neighborhood are using data to identify safety issues and build relationships with the police. It’s a story of community-engaged research at its best.

In 2017, the Milwaukee Police Department received a grant under the federal Byrne Criminal Justice Innovation program, now called the Community Based Crime Reduction Program, whose purpose is to bridge the gap between practitioners and researchers and advance the use of data in making communities safer. Because of its close ties in the Amani neighborhood, the Dominican Center was selected to lead this initiative, known as the Amani Safety Initiative, and they partnered with local churches, the district attorney’s office, LISC-Milwaukee, and others. To support the effort with data and coaching, the police department contracted with Data You Can Use.

Together with Data You Can Use, the Amani Safety Initiative team first implemented a survey to gauge perceptions of public safety and police legitimacy. Neighborhood ambassadors were trained (and paid) to conduct the survey themselves, going door to door to gather the information from nearly 300 of their neighbors. The ambassadors shared these results with their neighborhood during what they called “data chats.” They also printed summary survey results on door hangers, which they distributed throughout the neighborhood.

Neighbors and community organizations were surprised by the survey results. Though violent crime and mistrust in the police were commonly thought to be the biggest issues, the data showed that residents were most concerned about traffic safety. Ultimately, residents decided to post slow-down signs in intersections.

This project stands out for letting the people in the neighborhood lead the way. Neighbors collected data, shared results, and took action. The partnership between neighbors, police, and local organizations shows how people can drive decision-making for their neighborhood.

The larger story is one of social cohesion and mutual trust. Through participating in the initiative and learning more about their neighborhood, Amani neighbors built stronger relationships with the police. The police began coming to neighborhood community meetings, which helped them build relationships with people in the community and understand the challenges they face.

According to Sister Patricia Rogers, executive director of the Dominican Center, the new collaboration signals a shift in how information is shared: “The people don’t want a whole laundry list of crimes that happened. They know that. They need to know how they can help the police and what they can do to help themselves.” People in the Amani neighborhood are doing just that: they are helping themselves and using data to do so.

The Amani neighborhood has received a follow-on grant and will continue to track data and collaborate with the police department, their elected officials, and local organizations in the upcoming year to advance public safety.

This story was written by Kassie Scott at the Urban Institute, drawn from documents and interviews with Katie Pritchard and Sister Patricia Rogers. Data You Can Use is the Milwaukee partner in the National Neighborhood Indicators Paternship, a learning network in 30 cities, coordinated by the Urban Institute. Alll partners ensure communities have access to data and the skills to use information to advance equity and well-being across neighborhoods.


The Robert Wood Johnson Foundation, in partnership with the Urban Institute, has selected 38 organizations from around the country for the...


A 3-part blog series that examines the relationship between research and community organizing.

Thanks to community-driven research conducted by the Urban Strategies Council (The Council), the new director of the City of Oakland’s Department of Violence Prevention is...

In 2018–19, 20 high school students identified the assets of and health needs for their Del Valle community, which directly informed the priorities set in the 2019 Austin/...