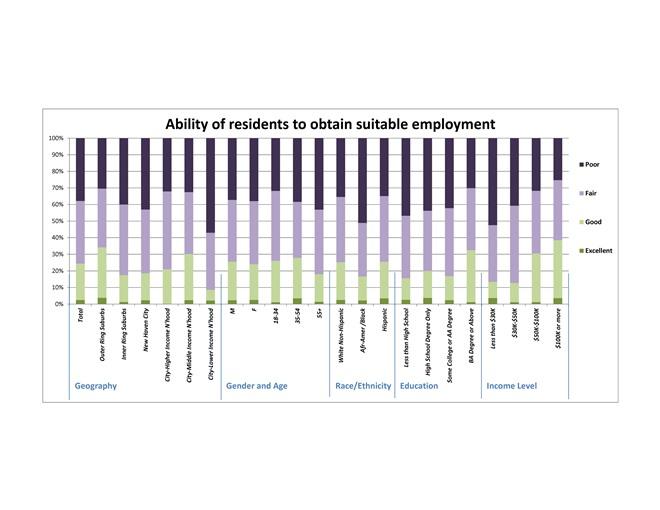 The DataHaven Greater New Haven Community Wellbeing Survey was a complete update of the 2003 Community Compass, a data compendium and series of surveys about critical issues impacting the prosperity of our region.

In 2012, Yale CARE and Yale-New Haven Hospital, the City of New Haven, DataHaven, and other institutions formed a partnership to repeat a 2009 door-to-door survey. DataHaven secured funding in order to launch a parallel survey effort that covered the broader New Haven area, including the city as a whole. The survey produced regional and citywide, neighborhood-level comparison data on topics such as quality of life, civic engagement, education, and economic security. The DataHaven Community Wellbeing Survey was conducted in the fall of 2012 with the help of Siena College. It interviewed 1,307 randomly-selected households to produce results that are representative of major geographical and population groups.

In 2015, DataHaven expanded its Community Wellbeing Survey to encompass the entire State of Connecticut and sections of New York State, while retaining its mission to produce high-quality neighborhood-level and regional estimates for major metropolitan areas throughout the state, including Greater New Haven, Greater Bridgeport, Lower Fairfield County, Greater Hartford and New Britain, Southeastern Connecticut, the Naugatuck Valley, and other areas. The program is designed with and supported by over 100 government, academic, health care, and community partner organizations, and completed in-depth interviews of nearly 17,000 randomly-selected residents in 2015.

In 2018, we are repeating and expanding this innovative statewide and regional program. Once again, over 16,000 randomly-selected adults in every town in Connecticut will participate in live, in-depth interviews.