The Pew Research Center, one of our favorite data analysis sites, recently released new data that shows that 78 counties nationwide switched to “majority-minority” between 2000 and 2013. Four of those counties are located in the 10-county Atlanta region (Douglas, Gwinnett, Henry and Rockdale). 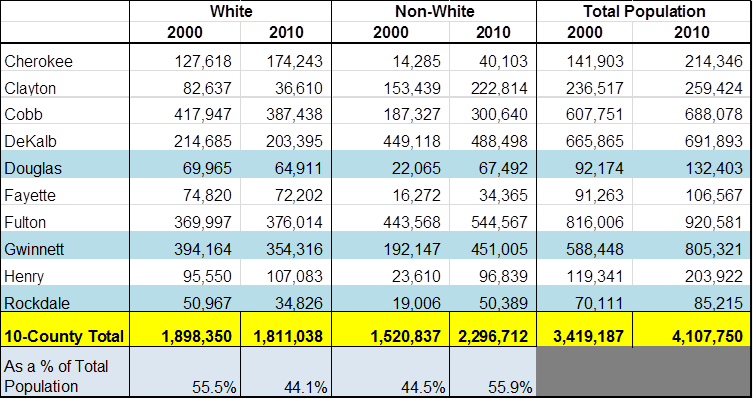 We have talked about the diversification of the Atlanta region for years, and, in fact, we found that three of the aforementioned counties actually turned majority-minority by 2010, as the above table shows (highlighted in blue). Further, the entire 10-county Atlanta region was majority-minority by 2010, with almost 56 percent the total population classified as Non-White. Of course, the most radical shift occurred in Gwinnett, where the Non-White population increased by more than 255,000, while the White population declined almost 50,000. The Pew study, based on recently-released Census estimates, confirms that this diversification trend has continued.

We also explore neighborhood-level changes in the "majority-minority" status. Check out the full post on our new reaserch blog, 33°N: Finding Meaning @ 33.7°N