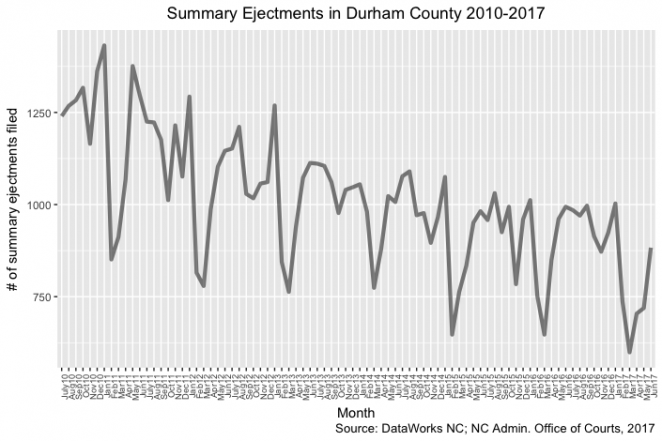 Since 2016 DataWorks has been tying neighborhood indicators more closely to themes of gentrification. Following a May 2016 presentation to City Council - and the persistent question of whether people were frequently displaced by gentrification - we began collecting data from the Durham County Sheriff's Department on notifications of summary ejectment and writs of possession. These are the two civil court processes for tenant evictions: summary ejectments when a landlord starts a formal eviction process against a tenant; and writs of possession when a summary ejectment has been granted, the tenant has failed to fully vacate the premises, and the Sheriff's Department padlocks the unit.

The Sheriff's data (address-level records from 2012-2016), revealed a surprising volume of summary ejectments in the county over a 5-year period (55,169) and as many as 2,300 in particular neighborhoods. Using county-level civil process summaries we learned that only 55% of summary ejectment filings were granted in the years 2010-2017 (46,955 out of 84,615) - but even an initial filing causes tenants great stress from the risk of displacement. And tenants who manage to pay their landlord and avoid the court hearing will often then have the filing fee to pay back - and may experience cyclical eviction filings due to seasonal cash flow issues. Using county-level civil process records we are able to identify some of that seasonal volatility, illustrated by the attached chart of monthly flows in summary ejectment filings. (The steady decrease in annual court filings shown here has prompted us to begin qualitative work exploring changes in the scale and nature of informal evictions - the number of which are perhaps impossible to gauge precisely.)

The availability of this data has helped point out that a substantial amount of displacement is indeed occurring in Durham neighborhoods - clarifying who is most vulnerable as neighborhoods gentrify. But the data has also been directly helpful in showing the urgency of supporting Durham's emerging eviction diversion program, coordinated by Durham Social Services, Legal Aid, and Duke University Law School's Civil Justice Clinic. In December 2017, the City's Human Relations Commission began exploring the crisis of evictions by observing court hearings, interviewing lawyers and civil servants on the front lines, and examining these data. Their report, with recommendations for preventing or mitigating the impact of evictions, can be found here. A series of articles by Sarah Willets at the IndyWeek, the Triangle's weekly paper, reported on this as well incorporating maps and data with stories.

Neighborhood-level summary ejectment data will be made available through the Durham Neighborhood Compass when it is relaunched in May 2018. DataWorks is also coordinating its efforts with UNC Charlotte's Urban Insitute (an NNIP partner) and UNC Greensboro's Center for Housing and Community Studies. Each are doing tremendous work to support renters and community partners with the same data.