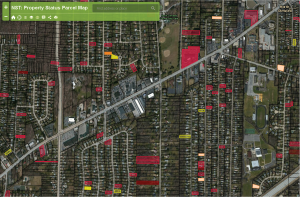 Using data from NEO CANDO, Michael Gareau Jr., director of law of North Olmsted, reported that foreclosures in the city have declined from 118 between January 1 through September 30, 2014 to only 65 during the same period of 2015. Gareau explained these findings to the North Olmsted city council on November 4 according to a Cleveland.com article.

In addition to the decrease in foreclosures, the average real estate sales price went up. "All in all, I think it is some good information that shows, hopefully, things are going in the right direction," Gareau said.

NEO CANDO is the Northeast Ohio Community and Neighborhood Data for Organizing, is a free and publicly accessible social and economic data system of the Center on Urban Poverty and Community Development. The above image is a map from NEO CANDO's Neighborhood Stabilization Team (NST) Web App showing foreclosure in North Olmsted.