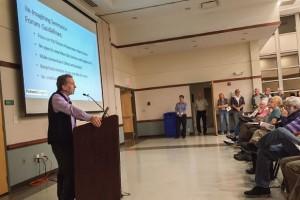 Severance Town Center in Cleveland Heights went into foreclosure this past June. Dr. Mark Chupp, a faculty associate of the Poverty Center, participated in a public forum about the troubled retail property as reported by Freshwater Cleveland in "Cleveland Heights residents voice their ideas for a city landmark" on November 19, 2015.

"There were some people interested in the mall when it was in its heyday," said Chupp who presented during the forum as a board member of Future Heights. He explained that Severance, as the first mall in Ohio, was an attraction in the 1960s. However, as the purpose of the space changed, the Center no longer reflected the culture or landscape of Cleveland Heights.

Dr. Chupp believes the open forum was not to begin a planning process on what to do with the beleaguered property. "It was to say we know this is a problem, there are going to be changes and we need to pay attention to it and to begin a dialogue between concerned residents and city leaders."