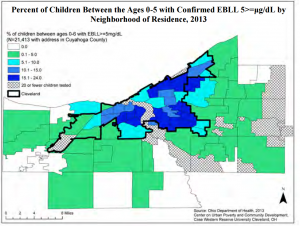 At what level does lead exposure become dangerous for children?

Dr. Robert Fischer, Co-Director of the Poverty Center, and Dr. Elizabeth Anthony, Research Assistant Professor at the Poverty Center, examine this question in The Conversation. In the article, " In kids, even low lead levels can cause lasting harm," Fischer and Anthony discuss how children exposed to levels of lead below the current federal threshold still show cognitive deficits and delays in academic progress.

According to Fischer and Anthony, "there is no known safe level of blood lead for children, and the American Academy of Pediatrics and the Centers for Disease Control and Prevention have said as much. The medical research community has documented negative impacts on children with even lower levels of lead exposure than the current 5 micrograms per deciliters standard. With that view, we might consider every child with a confirmed nonzero lead test as at-risk."

The map above is from the Cuyahoga County Invest in Children 2014 Early Childhood Data Brief on Lead Exposure.

This article was republished by the blog IFLScience.